Demetri Martin is a genius with language. His jokes are that of a wordsmith, always incredibly tightly written. This is one of his first one-man shows; it is structured around the word “if.” Each segment is about a different understanding of the word. He brings up a dictionary and goes through each definition, and those segments then take us through the phases of his life.

END_OF_DOCUMENT_TOKEN_TO_BE_REPLACED 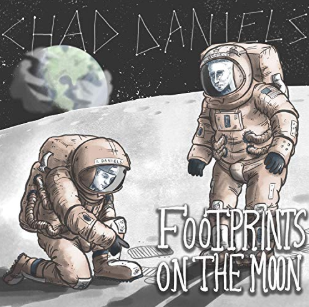 Footprints on the Moon is one of the best comedy albums of the 2010’s. It was a turning point for Chad Daniels. He had been gaining momentum as a comic, and this album reached even more people and broke through to more mainstream audiences. It is a great blend of more classic stand-up styles, edgier punches, and the newer style that in favor of autobiography. His punchlines are a mix of silly, dark and grounded. Chad Daniel’s character on stage is that of a well reasoned dude-bro-father. He clearly, and comically explains his point of view, while never coming off as mean or punching down.

END_OF_DOCUMENT_TOKEN_TO_BE_REPLACED

K Trevor Wilson is a canadian comic who has two albums and a special out. In December 2019, he released a Christmas comedy album, titled “Christmas with K”. Wilson was on Just for Laughs 2012, and a character in the popular youtube sitcom series “Letterkenny” that recently ended. His voice seems perfect for doing cartoon work as it expressive and jubilant. This album is an hour long and combines sketch and stand up comedy and is entirely about christmas.

END_OF_DOCUMENT_TOKEN_TO_BE_REPLACED

Daniel Van Kirk is a stand up comic, and podcaster. His two podcasts are Dumb People Town which he does with the Skylar brothers and Pen Pals, which he does with Rory Scovel. He also did a podcast called Hindsight, which had mid level comics talking about photos of their choice. I had the chance to see and perform with him live on his “The Together Tour” show when it came to Louisville. He performed Andrew Youngblood, and both of them did an amazing job.

END_OF_DOCUMENT_TOKEN_TO_BE_REPLACED

The New One explores Mike Birbligia’s decision to have a child and first year with the child. Bribligia’s Sleepwalk With Me, and My Girlfriend’s Boyfriend follow the same formula he explores a deeply prevalent issue in his life in great personal detail. I think My Girlfriend’s Boyfriend is one of the best specials in my lifetime. It is able to reach distinctly profoundly sad, but also silly and full of jokes, while presenting a cohesive hour long story. Here the effort of making an hour long story feels more forced than before, but doesn’t fail to surprise or create genuine laughs.

END_OF_DOCUMENT_TOKEN_TO_BE_REPLACED

This special is Tiffany Haddish’s victory lap. She’s had a great year, and reminds us of it at the top of this special: She starred in a movie with Kevin Hart, became the host of the gameshow “Kids Say the Darndest Things”, and had two Netflix shows (Tucca & Birdie, and They Ready). Haddish is on top for this special– she exudes fun. The material she did on her first special “She Ready” was tight, and autobiographical. It felt like the material she had been working on her entire life. This special is significantly looser, and feels more like hanging out with Haddish, rather than a meticulous effort of joke writing.

END_OF_DOCUMENT_TOKEN_TO_BE_REPLACED

Jayde Adams doesn’t come off as a stand up comedian when she starts this special, as her first few jokes involves projecting images, and she’s wearing a small mic that looks more in place at a business conference than a comedy club. Despite all this Adams proves that she is hilarious and has a lot to say.

END_OF_DOCUMENT_TOKEN_TO_BE_REPLACED

I saw Paige Weldon open for Maria Bamford earlier this year at Limestone Comedy Festival. She was great — not only were her jokes solid, she was also the perfect energy to open for Bamford. She has two albums out, one EP and another a full length album. Both are enjoyable, fun albums.

END_OF_DOCUMENT_TOKEN_TO_BE_REPLACED

I have a cousin who I don’t understand. This person has bragged to me about his drug dealing during middle school. This guy is generally good-looking and always has some kind of girlfriend, and he comes from a family with a lot of money. Pete Davidson is a comedian for this guy. This guy doesn’t overlap me in any perceptible ways. The Venn diagram between us is just two circles. Pete Davidson is a person you probably know from Saturday Night Live, but also — apparently! — does stand-up.

END_OF_DOCUMENT_TOKEN_TO_BE_REPLACED

I saw Michelle Wolf at the Comedy Cellar in New York City. I had not seen her live before, and I had only seen the video of her White House Correspondents’ Dinner set. At the Comedy Cellar, she went last in the lineup and was by far the best comic of the night and the only comic who was getting consistent, quality laughs. The material she did that night is on this special and it’s some of the best stand-up I’ve heard this year.