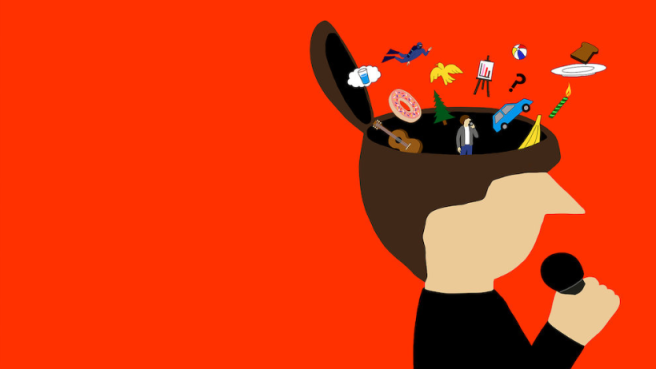 This special opens with Demetri Martin saying something about “being the best improv ever” and then going into his jokes, about squirrels always thinking they’re late for something. Then you hear his internal monologue as he comments on his name and title appearing on the special. It’s a simple effective way to start this comedy special in medias res. Martin wears a simple black shirt with black jacket and jeans. The background is a kind of rustic looking solid red. It’s very smooth, and Martin pops off the background.

There is a segment where he does drawings. He doesn’t do this every special, but the way it’s incorporated is a little bit different, as he both has the white pad, and uses some drawing edited in post. The first jokes of these have Martin showing us various alphabet letters with people drawn around them. The M made into open legs, the W made into a fallen man, the A made into an– Asshole. It’s a witty and inventive joke that is firmly in martin’s wheelhouse. There are very inventive parts where he cuts out various shapes in the paper and only flips over half a paper. There are flowcharts to express complicated wordplay. These jokes will be polarizing, some people will feel that it’s a churches to stand up comedy, but I find these to be very inventive and interesting and a lot of possibilities to jokes.

One of my favorite jokes in this special is about cruise ships. My favorite part is when he talks about how it would suck to die drawing on a cruise ship, as in drowning in the pool on the cruise ship. “He drowned in the pacific ocean? No he drowned on pacific ocean” during this joke there is a pop up of other shitty ways to die. Once again this joke showcases the turn of language that Martin is excellent at, while being silly and accessible to most every english language speaking person.

This special has a feature where Martin will ‘think’ during it. It is a voice over of his voice own during certain jokes. One example is when he takes a drink of water, and comments on it. It is unclear to me if this is happening during the live event as well, or not. He doesn’t do it enough to really make it a true different experience for the show. It’s just kind of randomly inserted into some jokes.

He also does a few jokes with a guitar. A staple for a lot of his specials. These are quick one liner jokes, that don’t as far as his other material. They’re just quick in and out. Right after the guitar bit there is a silly bit about the using the mic stand as a metal detector.

This special is good, and solid. It’s not the most far out Martin has ever been, but it is firmly himself. His earliest special “If I” still has a similar feel. But that has more risks, goes further. But it has less jokes. The overthinker shows that Martin can put out specials at a consistent rate and still be solid, if not exceptional comedy. I think if this were the first Martin special you had seen, it could be like “Whoa! This guy has no bounds!” but he’s built up to this point consistently, and made it part of his style, so it’s not so surprising now.