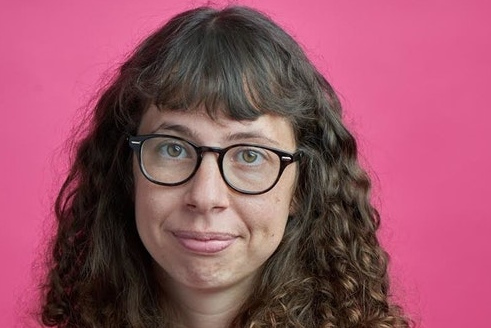 I saw Paige Weldon open for Maria Bamford earlier this year at Limestone Comedy Festival. She was great — not only were her jokes solid, she was also the perfect energy to open for Bamford. She has two albums out, one EP and another a full length album. Both are enjoyable, fun albums.

The EP, Uncomfortable at Best, was released in 2016 and is 15 minutes long. It feels like she had a good feature set, got good audio, and decided to release it. I think that’s a great way to do an album like this. I hate hearing that a comic is planning on doing an album recording of a show because it creates so much expectation.

Most jokes don’t have specific references. But one joke is about trying to find a good boyfriend. She brings up various bands, as the joke is about finding a boy in traffic based on the music he’s listening to. I don’t know what room would know all of these bands well enough for this joke to fully hit. Regardless, she is able to make her point, and the ideas in the jokes are there and mostly make sense. On google play, which is where I listen to most comedy albums, this is the more popular of the two. I think it helps immensely that it is so short at only fifteen minutes.

The full length album is called Girlfriend at the Time. While the first album starts with a joke about what Weldon looks like, the second starts with her saying that she “brought her phone up to see if anyone texts her to apologize for not coming.” She doesn’t come back to this during the album, but it is a fun little idea that quickly positions her as both petty and willing to comment on it.

One joke is about how she is cute, and she knows this because she doesn’t have to buy her own drugs. It is kind of the other side of Micheal Che’s bit about white girls stealing dudes’ hats and dudes never getting their hats back. Weldon goes on say that whenever she wants weed, she can just “go out and get into a serious relationship, it’s not so hard.” This extreme under hyperbolizing is silly but feels true.

The title of the album comes from a track about how people will stumble on the phrase “girlfriend at the time” — how it seems like they meant to say girlfriend, and then had to “edit in the middle of their sentence.” This dry observation she makes clearly defines Weldon’s comedic voice. She’s an awakeard-cool girl who wears clothes from a cool thrift store, and is introverted but has a lot to say to her friends.

Right after “Girlfriend at the Time” she does a joke about how if you encounter an old friend and they say “oh, it’s been too long,” it probably has been too long to actually catch them up on your life, and they will ask too many questions any time you are telling them a new story. This jokes is perfect for Weldon, as it’s both smart and deliciously petty. It leans into Weldon’s awkward but confident voice that won’t confirm to others’ expectations.

Weldon is quiet — she mentions this during her sets — and monotone. She often says “um. Both of these could easily be detractors without the strong personality she brings to each joke. She has specific references and strong word choices. She seems like a person you would see in the mall, or a friend you would have had in high school who always has something funny to say — if you’ll listen to her.