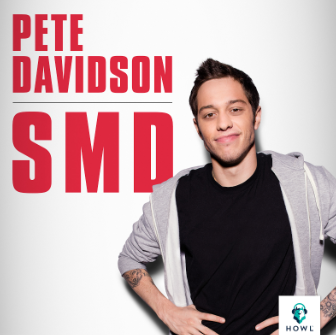 I have a cousin who I don’t understand. This person has bragged to me about his drug dealing during middle school. This guy is generally good-looking and always has some kind of girlfriend, and he comes from a family with a lot of money. Pete Davidson is a comedian for this guy. This guy doesn’t overlap me in any perceptible ways. The Venn diagram between us is just two circles. Pete Davidson is a person you probably know from Saturday Night Live, but also — apparently! — does stand-up.

SMD covers common stand up topics such as drug use, high school and porn. I’ve heard all of these topics before, but Davidson is able to bring his down-to-earth vibe to each joke or story. One joke towards the beginning is about how Davidson was a loser in high school. This is already hard to believe. He went to three different high schools, and at each, everyone was an asshole, but he realized at the third one that the problem was him. His delivery of the line “Oh, it’s just me” is perfect, in being both a turn of idea and a silly way of making fun of himself. Then he goes on to say that he had a roller backpack, and goes into a joke about people making fun of him for looking like he had luggage.

One of his last jokes is about his dad being a fireman and dying in 9/11. I believe this is what people know him best for and what gained him traction in his early days. As he begins these jokes, the audience does a kind of groan. They seem, understandably,uncomfortable with the jokes. “Dad died and I got a PS2, seemed like a pretty good tradeoff when I was 7” is an uncomfortable joke, but these jokes are some of his strongest. They are very unique to him. He ends the album with a joke about how he wants to get his dad’s initials tattooed on him, but the initials are SMD, which also means “suck my dick.” This joke works well for Davidson, as it leans on his sexual energy and bravado. Here he becomes both sympathetic and the dude every dude wants to be.

Do you see that album cover? With just a white guy on a blank backdrop? What is interesting about that album cover? What would make a person with personality, who does not know who Pete Davidson is, pick up that album? I cannot imagine a single reason. Like most albums, the album cover is a strange reflection of the content, and there are few ideas. I have been told that a lot of Pete Davidson’s appeal is his raw sexual energy. Ah, okay, I guess that doesn’t come through to me, a gay woman, over an album. Is that why we enjoy comedy? Is that why Gilbert Gottifried is so good at comedy– his raw sexual energy?

Pete Davidson is huge, though. He sells out basically everywhere he goes. Obviously there is something I am missing and/or simply do not care about. Is it that people love him on SNL? Because every time I see his sketches, I’m like, what is there to this? Where is the content? Where is the punch? I never seem to find it. Rather I am find more and more curiosity about why this guy is famous.